Today is my Dad’s birthday, so Happy Birthday Dad!  One of the hardest things about living abroad and being away from your family, is missing birthdays or anniversaries or even Sunday Lunches! Of course this makes the time I spend at home even more special but I do miss being there for special occasions and of course birthday cake!! Thank goodness for skype! When my Mum lived in Germany she could only call my grandparents or write letters…these days you can face time, skype, whatsapp, distances of thousands of miles can be forgotten in seconds!

I haven’t done a Things I Love Sundays post for a couple of weeks, for one reason or another, so today I am doing a little catch up of everything I have been thankful for and loved over the past weeks!

–Spontaneous trips to Venice – Catching Up with one of my best friends – Laughing uncontrollably and not really remembering why – Cappuccinos and Amaretti – Singing in a choir again for the first time since High School – Surprise birthday dinner for my friend and seeing her completely shocked – French lavender candles – Skyping with friends – The first signs of Autumn in the park – Unexpected late Birthday presents…loose leaf Sencha and Oolong tea which smells divine! – Salted Caramel and Rose Macaroons – Walking for hours and getting lost, but not really caring – Peaceful nights sleep at the Casa Caburlotto and waking up early (something I don’t find comes naturally!) – Late night walks to buy chocolates in Venice – Singing and dancing around my apartment to 60’s and Motown music…The Shangri-las, The Shirelles,  Procul Harum, (which my love for, is thanks to my Dad! It was all we ever listened to in the car when I was little!) –

One of our favourites…

Have a great week everyone!

A recurring feature of my posts, seems to be Milan’s Duomo. The Cathedral is very much the centre of the city and is used as a frequent backdrop for concerts and events. You may have read my post Music by Moonlight about the opening night of Expo here in Milan and the wonderful concert featuring Andrea Boccelli and pianist Lang Lang.  Or perhaps the post A Roof with a View! showing some of the stunning views offered from the terraces of the Duomo.

Last week, once again it took to centre stage, this time for Pietra e Preghiera an evening of video-mapping on the façade of the Duomo. Using modern technology they projected lights and both still and moving images onto the building, accompanied by the beautiful music of Giuseppe Verdi. 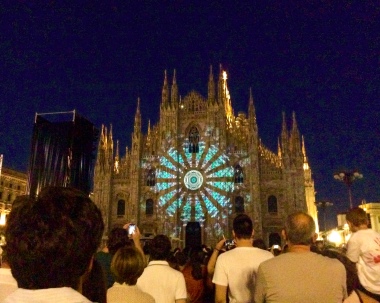 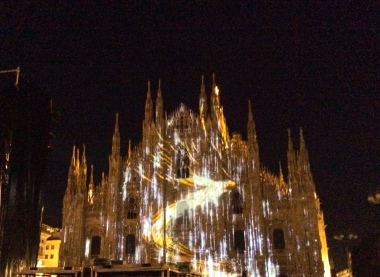 It really was quite a magical and mesmerizing evening! Sometimes we stop noticing the things around us and we take for granted historic and amazing buildings.  The Duomo is truly a fantastic piece of architecture and events like this make you stop and appreciate it once again! 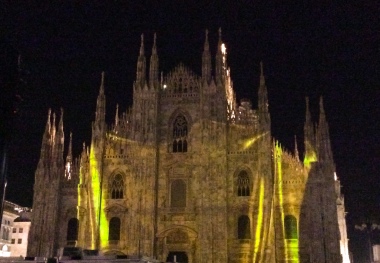 Have a great weekend!

p.s. Check out my Instagram for a video of the night!

For those of you who follow me on Instagram, you will know that a couple of weeks ago on another sunny Sunday afternoon, I went to the last day of Piano City Milano. This is a a three day event held every year with all types of piano concerts spread across the city! There are concerts held in parks, trams, houses, gardens, Piazza’s and museums to name just a few locations!  There is something for everyone with everything from classical, jazz and pop music to baroque and electronic! Not only is the music fantastic and all concerts are free, it is a great way to explore the city and discover new places!

For example last year, my friend and I went to a concert in the beautiful gardens of Villa Reale, which is the heart of the event and known as Piano Giardino (Piano Garden).  So naturally this year, I took my friends who were visiting there, to listen to some light Jazz and take a well needed break from all the walking we had been doing that weekend! 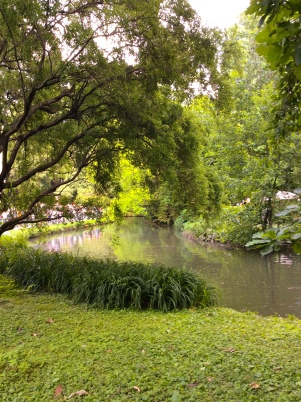 We listened to pianist Alberto Tafuri play homage to Neapolitan musician Pino Daniele.  A large crowd had gathered (luckily we found space on the grass to sit!) and we spent an idyllic hour listening to him play some beautiful pieces! You can hear a short clip of one on my Instagram page. 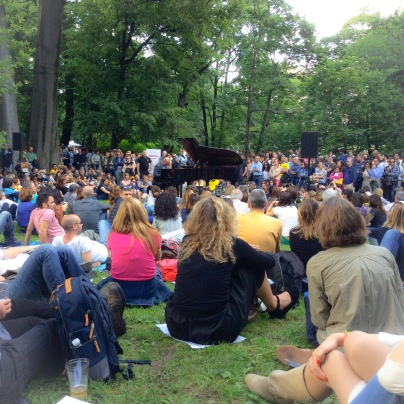 There were lots of piano’s to have a little play on – all painted and decorated in funky ways!

I especially loved this one!

Hope you are all having a great weekend!

Last week I spent a whole day being irrationally annoyed and for the most ridiculous of reasons.  I would say I am a very optimistic happy person, but I have learnt that I can be irritated by the most obscure things! Last week it was because my headphones broke!  Yes….that’s all!  It is not the first time the same thing has caused me so much annoyance…last year on my overnight flight from New Orleans to London another pair broke and I had to spend the entire flight using the awful ones they give you for free – you know the crackly ones which never stay in your ears and are just so uncomfortable!

I do realise how silly it is to get so angst up about such a minuscule ‘problem’ but it made me think, why is it this annoys me so much?  Like when I forget my iPod, or can’t find anything good to listen to on the radio?  Don’t get me wrong, I also love talking to my friends (or strangers on the metro for that matter) and sometimes I just love sitting quietly, listening to the world around me or eves dropping on other people’s conversations! (Hehe!) But for the majority of the time whilst I travel around the city for work or am on a train or plane or driving somewhere, or cleaning my house, or working at home, or cooking…what I most enjoy is listening to my favourite songs, or having a singing session or dancing around like a lunatic!

I wasn’t one of those typical British teenagers who grew up listening to Backstreet Boys or Take That! I started liking more ‘popular’ music when I was a bit older! But what I did love was 60’s music and basically anything my Dad played in the car! I loved The Shangri-Las, The Shirelles, Louis Armstrong, The Monkees, The Kinks! I also fell in love with classical music and jazz…basically anything you can sing along or dance to!  But I think it is thanks to my musical upbringing and influences from all my family that now I have a very wide range of musical interest!

I also had not only piano lessons, but also flute, saxophone and singing lessons! I sang in choir and chamber choir at school and played in band and the orchestra. I also took dance classes and one of my favourite parts of this, was seeing what music the teacher had chosen for our new show or exam dance! Three of my personal favourite choices were Bjork ‘It’s oh so quiet’, ‘Move on’ from Chicago and ‘Mack the Knife’ – I will take any version of this song, one of my all time favourites!

So, what I am trying to portray is how important music has always been to me and I feel has become a fundamental part of who I am!  I listen to music if I am happy, sad, angry, stressed, need to relax, can’t sleep…there is a song or a genre for however you are feeling! I truly believe this! Therefore this must be why I get so annoyed when I can’t use my headphones – it has the opposite effect on me…perhaps I should start carrying spares…or invest in better quality ones!?

One final thought…pianist Vincent Corver commented last week on a video I put on my Instagram page of Andrea Bocelli saying that ‘Music is an art that connects us universally’ and I could not agree more.  It is one of the most powerful tools we have in life and one which can break boundaries and connect us all together in one moment!

Would you agree? How important is music in your life?

I leave you to reflect with Louis…

Last night in Piazza Duomo under the moonlight, I was serenaded by the amazing vocals of Andrea Bocelli and the phenomenal talent of Chinese pianist Lang Lang! Well in reality, me and around 20,000 other people, along with a live TV audience….but still it was amazing!

Milan really is beautiful at night and the Duomo looked stunning!

It was the opening night of Expo2015 Milan, a six month World Exposition which starts today and runs until the 31st of October. The theme of which is ‘Nutrire il Pianeta, Energia per la Vita’ – ‘Feeding the Planet, Energy for Life’.  The idea is to bring together countries, ideas, people and cultures from all over the world, to talk about sustainability and providing food resources for everyone world wide, working towards an end in famine and poverty.

There has been speculation as to whether a large scale exposition, where millions has been spent in preparation, not only building an enormous exhibition space, but also on improving the city, is the best way to tackle these issues, but if it raises awareness then surely that is helping?  Still, many people are against the Expo and there have been many protests and I’m sure they will continue throughout the next six months.  And of course, this being Italy there has been talk of corruption and all sorts of questions arising, including would they finish preparation in time? But, we will have to wait and see before anyone can decide if Expo will be a success!

I am personally quite excited about it all, there are 148 countries taking part, many who have had their own pavilions built in order to showcase the best their country has to offer.  The UK’s pavilion for example, features bees (and I love honey!) to show how Britain is a ‘hive’ for business, creativity and science! Also lets not forget as an exposition focused on food, all the countries participating will be offering up some of the best of their cuisine and I for one am excited to try some new food and take a culinary trip around the world!  Plus there are hundreds of other events taking place in Milan’s museums and all over the city under the guise of Expo, even though many take place every year, such as one of my favourites Piano City. 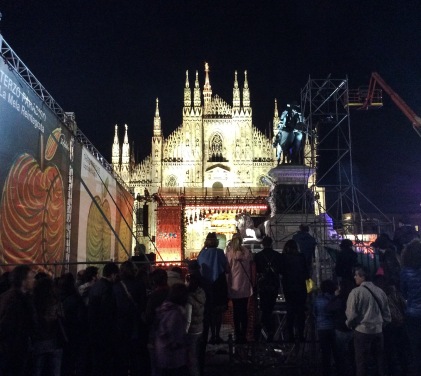 But back to last night and Andrea Bocelli serenading me…oops sorry ‘millions of people’ in Piazza Duomo! He was joined by not only Lang Lang, but also sopranos Diana Damrau and Maria Luigia Borsi, tenor Francesco Meli (wow what a voice!) and baritone Simone Piazzola. They were accompanied by the Chorus and Orchestra of Teatro alla Scala and the Orchestra of the Teatro alla Scala Academy and played homage to Giuseppe Verdi, Giacomo Puccini and Gioacchino Rossini, amongst others. It really was a magical evening and the musical talent of these people is simply outstanding! Andrea Bocelli’s voice is surreal and for me it was a dream to hear him sing live, as I have always admired him!  Plus I had serious piano envy as Lang Lang played the most beautiful Steinway & Sons Grand Piano!  Maybe one day I will get to play one…..

I have put two short videos on my Instagram page of Andrea and Lang Lang, which you can access from the side bar!

Are you planning on visiting Milan for the Expo?  What is your opinion about it all? I would love to hear from you!