One of my favourite neighbourhoods in Milan, is Navigli in the South of the city. Milan used to rely heavily on its network of canals and its harbour La Darsena for supplying water and materials to the city as well as for transportation. Over time as roads and railways were further developed, usage of the canals diminished as traffic travelled too slowly and their condition deteriorated. Gradually parts of the canals were filled in and the harbour become less important for the city. Today three of the canals remain, Naviglio della Martesana in the North-East and the Naviglio Grande and Naviglio Pavese in the South-West.  The Grande and Pavese join together with the Darsena in the middle, which when I arrived in Milan was quite a run down, desolate sight. However, shortly it will reopen following a major redevelopment project as part of EXPO Milano. The new Darsena will feature a covered market place, walkways and a waterfront for tourist boats!

I used to live really close to the Navigli and would pass by almost every day! It is one of the coolest and busiest areas in Milan and has some great restaurants and bars, as well as lots of vintage shops. There is also a great antique market held on the banks of the canal every last Sunday of the month (this month brought forward, due to Design Week). So I thought what better excuse to head over to the Navigli than to have a mooch around at all the market stalls?! Plus it was another beautiful sunny Sunday! 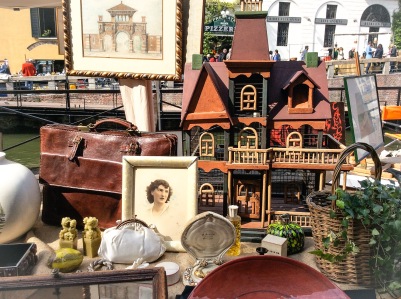 If I had a garden I would put this little dog out there – maybe even his penguin friends!

There is literally everything and anything you can think of available to buy – (if you have deep pockets!) I for one could have decorated a whole apartment with all the antique furniture and fittings! They were stalls selling vintage clothes, jewellery, shoes and bags, people selling fabrics and fur coats. Retro children’s toys, antique musical instruments, old advertising prints, jewellery, books and pottery as well as people selling artwork. 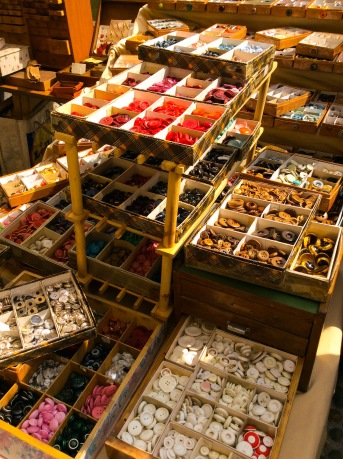 This was one of my favourite finds, there was a button in every colour you can imagine! You could jazz up some old clothes with these!

For anyone who enjoys antiques or vintage things, make sure you put this on your list if you find yourself in Milan! In my opinion there is something for everyone! Plus it is another chance for a spot of people watching…Navigli is full of cool street style and well dressed Italians…and a lot of cute dogs too!

Have you been to any great antique markets?  Discovered any interesting finds or bargains?

Finally the weather here is warming up, the flowers are out, the sun is shinning and you can’t help but have a smile on your face! Spring always makes me feel happy (especially as it means Summer is on the way!) and what better way to enjoy a Spring Sunday than with a stroll in the park!?

I met my friend this afternoon to do just that in Milan’s Parco Sempione, which covers (as I learnt today) 40 hectares from Castello Sforzesco to the Arco della Pace. Apparently it was designed in the style of traditional romantic English parks – which really surprised us – and features watercourses, paths and small rises! I personally love the park as it offers up some excellent people watching opportunities, which is one of my favourite things to do on a lazy weekend!  Milan is abundant with interesting characters to spy on, especially when the sun comes out! Hehe!

After a leisurely walk around, we sat down in the sun on Corso Sempione, to enjoy a refreshing Aperol Spritz.  This is a typical Italian aperitif, particularly popular in the North of the country and is made using 2 parts Aperol (a rather bitter liqueur), 3 parts Prosecco and 1 part Soda! Delicious! 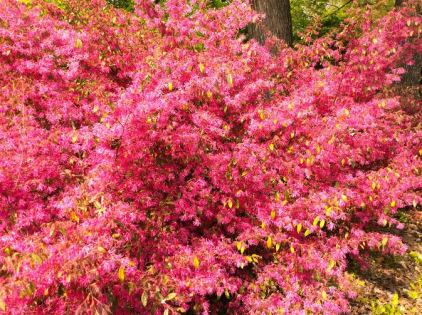 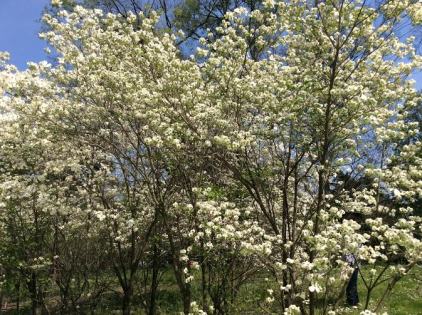 Absolutely love this! Genius idea to bring your own hammock to the park! 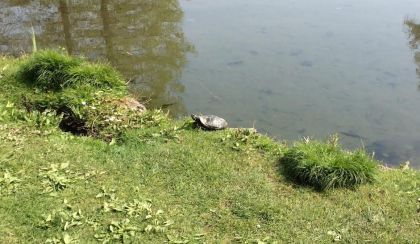 Hello there! Look at this little fellow…he has got the right idea, chilling in the sun!

We are definitely going to try and make this a new Sunday ritual!  Have a great week everybody!