For as long as I can remember I have adored Audrey Hepburn. Even before watching Breakfast at Tiffany’s for the first time, I was drawn to her timeless beauty and grace and watching her films only made me admire her more. Whether playing Eliza Doolittle in My Fair Lady, Sister Luke in The Nun’s Story or Regina Lambert in Charade she brings such elegance and intrigue to every character. 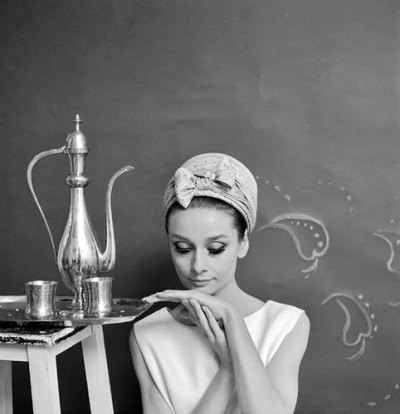 Taken by Cecil Beaton for Vogue in 1964 New York

I love how expressive her face is, those famous eyebrows, her glistening eyes and magnificent bone structure…she would have made a marvellous actress in the silent movie era! A trained ballet dancer she moves with ease across the screen and brings style to every role, whether dancing in Funny Face, singing in Breakfast at Tiffany’s or playing a runaway Princess in Roman Holiday!

A still from Funny Face, taken by Richard Avedon in 1957

Not only was Audrey Hepburn a true Hollywood Star, she was an incredibly talented woman and spoke English, Dutch, French, Spanish, German and Italian! She had that true star quality but also the ‘common touch’ in the sense that people could relate to her in all she had been through both on screen and in her, at times rather tragic, private life.

Towards the end of her life, Audrey dedicated a lot of her time and energy to being a UNICEF Goodwill ambassador and helping impoverished children across the world.  She travelled to many countries including Somalia, Ethiopia, Turkey and central America on UNICEF missions and whilst she must have found it completely devastating to see such sadness across the world, she was very passionate about her humanitarian work and if you have seen any images of her on these trips, you can see how personal it was for her.

This star quality that I have talked about and the ‘Audrey Hepburn Allure’, is still ever present and is bringing large crowds to the current Audrey Hepburn Portaits of an Icon exhibition at the National Portrait Gallery, running until the 18th October. I first heard about the exhibition before Christmas and was so excited to see it! My Dad and I booked train tickets to London on Wednesday but stupidly didn’t check first we could get tickets to see the exhibition, then found they weren’t available on-line or  via telephone! But after a sprint across London to the Gallery we managed to get in without problems…panic over! I was surprised by the size of the collection of portraits and a little disappointed that there weren’t more photos from her private life (as the exhibition was curated with collaboration from her family), however it was still highly enjoyable and had some beautiful images, including movie stills, magazine covers and backstage photos. I am very grateful we managed to get tickets and that I didn’t miss my opportunity to see her – we had just finished, when someone set off the fire alarm and we all had to be evacuated! Never a dull moment! 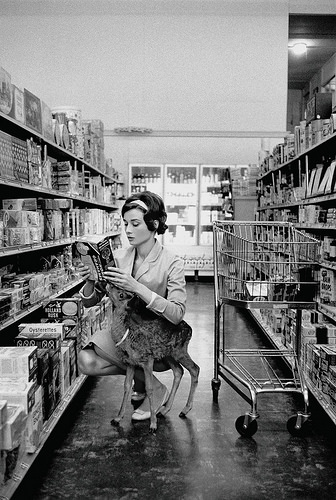 This was one of my favourite images from the exhibition, Audrey with her fawn shopping for groceries…as you do!

Have you been to the exhibition? What did you think? What do you admire about Audrey?

Personally I admire her modesty, her wonderful child like sense of fun and her compassion for other people…I can’t think how to describe it better, but she really does have an allure, a magical, star quality.

“If I’m honest I have to tell you I still read fairy-tales and I like them best of all.” (Audrey Hepburn)

Now I really must go as I feel an Audrey Hepburn movie marathon coming on, but I leave you with a fellow daydreamer, singing the perfect daydreamer song…