My Mum called me in July to tell me she had got us tickets to see The Curious Incident of The Dog in The Night-Time on stage in London.  She had read the book with her book club and they had organised a trip to see the production at the Gielgud Theatre in London’s Westend.  Whilst I had heard a lot of hype about the book and could recall its front cover, (with the distressing cartoon of a dog, stabbed to death with a garden fork), I had absolutely no idea what is what about. So, being a literature graduate and believing you should read any book before seeing the stage or screen version, I rushed out and bought myself a copy!   I am so glad I did, because Mark Haddon is a fantastic writer and I absolutely loved it – and I think having read the book first, made me appreciate the stage production even more! 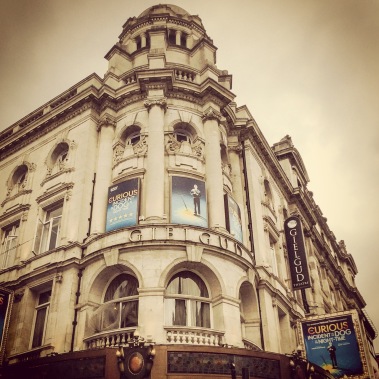 *I have tried not to contain too many spoilers, but if you haven’t read the book, read-on with caution!*

The Curious Incident is the story of 15 year old Christopher Boone, who in the middle of the night discovers that his neighbours dog has been murdered, stabbed to death with a garden fork! Christopher, who has Asperger’s Syndrome, is a fascinating character with a brilliant mathematical brain. He only knows how to tell the truth and is an aspiring Sherlock Holmes! He shares the same intensity as Holmes and loves making lists and seeing patterns in the world and so decides he will take it upon himself to solve the mystery of who killed Wellington, Mrs Shears’ dog.  In the book, Christopher becomes both the narrator and the detective and sets out on a journey of discovery to solve this case.  Having never ventured further than the end of his street alone, the book sees Christopher’s journey taking him completely out of his comfort zone to the hustle and bustle of London.  Whilst he has an extraordinary brain, he struggles with interaction and understanding people, dislikes strangers and struggles with intimacy. The way in which Mark Haddon has written this book gives the reader a great insight into the way Christopher thinks and reasons, as well as explaining why he behaves in certain ways and I found myself completely understanding him and seeing his logic – you are transported into his mind.

After having read the book, I was really excited to see how they would have transitioned it to the stage, especially for example: Christopher’s train journey, a rather frightening episode on the London Underground and the street on which Christopher lived. How would these be represented and how would they help us to go inside Christopher’s mind like in the book?

Well, Simone Stephens’ adaptation was wonderful and very clever! The twist is that the stage production is as if, we are watching a School production of Christopher’s book! The set is simple but very effective, with square panels and inset lights, which reveal maths problems and graphs, as well as secret doors from which the characters appear and hidden compartments which they use to take props from.  At one point Christopher constructs a train track of London, with a steam train moving around the stage, an underground platform is revealed – when he must rescue his pet rat Toby and an escalator suddenly appears as if by magic from the wall…so that it appears as if Christopher is walking in mid air! 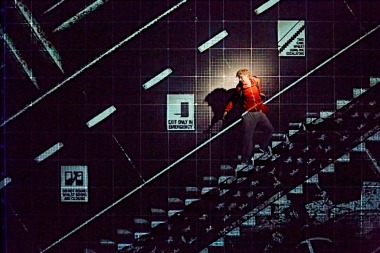 I went to a matinee performance and Christopher was played by Kaffe Keating, who was utterly brilliant! I look forward to seeing what he does in the future! 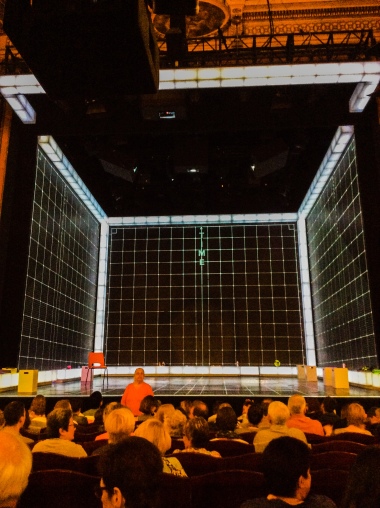 Whilst the book really takes us inside his head and reveals his inner thoughts and reasoning’s, the stage production allows us to share in his experiences of the external world and how this can at times seem very scary and surreal. The play features loud music and bright lights, the pace is fast moving and hectic, but at the same time the choreography is so beautiful and effortless that the story flows and moves from one part to the next with such ease. I found myself laughing more than I had expected and also with tears in my eyes more than once.

I am really glad my Mum got us those tickets and I finally got around to reading the book! I was not disappointed! Every single member of the cast was brilliant and the actor who played Christopher, Kaffe Keating, is certainly one to watch!  If you hadn’t guessed already, I can not recommend The Curious Incident strongly enough! But read the book first…because after all, that is where it all started!

Have you read the book, or seen it on stage? What did you think? I would love to hear!