If one word could sum up 2014 for me, it would definitely have to be ‘weddings’!  I took a total of 12 flights across Europe and America in the name of hen parties, dress fittings and of course the weddings themselves!  I also exchanged well over a hundred emails, texts and Facebook messages, concerning dress colours and measurements, shoes, wedding hair and make-up and hen party organisation! No, I am not a wedding planner (although I think I would love this job!) but I was instead honoured to be bridesmaid at three weddings and for three of my closest and dearest friends!

The first wedding was for my friend K and her now husband B. K and I met at the Univeristy of Urbino in Italy, where we were studying on our year abroad.  Within minutes of meeting I knew I had made an amazing friend and we spent the next four months attached to one another like glue, before K came to spend a week in England with my family and then headed back to New Orleans.  Two years later in 2013 I flew to stay with K and her family and she asked me to be her bridesmaid the following year when she married B!  I remembered her talking about him when we were studying together and how their parents wanted to set them up but it had never happened, so when she got back to New Orleans and was still mentioning him, I knew this was going somewhere!

It was the first wedding I had been to outside of the UK and I really didn’t know what to expect, but it was so great to be a part of their day and experience a ‘New Orleans wedding!’ Growing up I watched countless films and TV series about America, and used to be fascinated by the trends for Sweet 16 parties, Prom, engagement parties, engagement photos, bridal showers, bridal luncheons and rehearsal dinners to name but a few! When I reached the last year of high school, prom was starting to become much more common in the UK and now, is more or less a given to celebrate the end of year 11, but we are still to catch on to many of the other ‘American’ traditions! So after hearing K telling me all about the many bridal showers she was thrown, by her family and friends, but being unable myself to attend any of them, I was super excited for the bridal luncheon and rehearsal dinner.

After running errands all over town, stopping off for a pedicure and having a dress fitting, we got all dressed up and headed to her Bridal Luncheon! The idea of the luncheon, is to bring together the female members of the bridal party, so the bride and grooms’ mothers and grandmothers, bridesmaids and a few close family and friends. We all met at Commander’s Palace, a New Orleans landmark in the Garden District of the city and which has been open since 1880!  The lunch took place in a small private room, with floor to ceiling glass windows overlooking the tree-lined street and we feasted on some delicious creole cuisine.  Note to self: If you haven’t eaten much all day, go steady on the welcome mimosa’s before lunch…or you end up a little tipsy! The rest of the day was spend doing last minute preparation, before we drove the next morning to a beautiful house on Bourbon Street in the centre of the city, where I stayed with K and her family for the wedding weekend!

In the early evening, we got all dressed up again,this time for the rehearsal dinner which takes place immediately after the rehearsal at the church.  This was completely strange to me! In England of course we have a rehearsal, but then for the majority of brides and bridal parties, the evening is spent relaxing at their homes or in a hotel and getting an early night! Not the case on this occasion! After the rehearsal we all walked back to the house on Bourbon Street to be greeted by a large party of K and B’s close family and friends. The party is traditionally hosted by the Groom’s family who provided a wonderful spread. A further surprise to me was that there were speeches at the rehearsal dinner rather than on the day of the wedding! So we toasted the bride and groom before a group of us headed out to Lafitte’s Blacksmith Bar and then to Pat O’s for a few more drinks! Eventually we crawled into bed and caught up on our beauty sleep before the special day arrived!

The wedding itself took place in the early evening, which meant we had all day to be pampered and slowly prepare ourselves. K had her dress made for her, based on one she had seen and fallen in love with and she looked absolutely beautiful! Everything she had chosen was just perfect, the bridesmaid dresses, the flowers, the Church – Saint Mary’s Italian Church. The service which for K and B really meant a lot, was a very emotional affair and I don’t think there was a dry eye in the church! As soon as the service was over, we were back in the cars and making our way to the reception at Gallier Hall, escorted by the police! I thought this was pretty cool and very ‘American’ but apparently in a city where parades and heavy traffic are part of the daily life, it’s quite a normal thing to have.

K and B both come from Italian American families and so this was reflected in the food they served for their guests! All the food was prepared by the families and they did a superb job, it was mouthwatering! There was a buffet style meal, with dishes including mini muffulettas – (a classic New Orleans sandwich with a Sicilian twist), crawfish pasta and artichoke balls. This was followed by not one, but two enormous wedding cakes! The traditional three tiered one and then a Groom’s cake, for which B had chosen a Cassata Cake with Sicilian Cannoli on the top! But probably one of my favourite things about the wedding, was that in the traditional cake, they had placed cake pulls for the bridesmaids and K’s cousins. We all stood around the cake and chose a pull at random, which were in fact, freshwater pearl bracelets with a charm attached to each one. Then on the count of three we all pulled them out, to reveal the charms, each signifying something different, like love, luck or money. I just so happened to pull out the charm of a street car which apparently signifies travel or traveller – which seemed very apt for me!

The rest of the evening was spent dancing and singing away to BRW a wonderful jazz band – because lets face it, it really wouldn’t be a New Orleans wedding without some jazz, would it?! 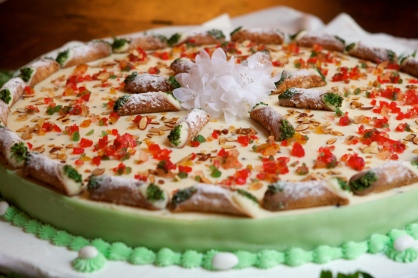 The cake pulls ready to be pulled by K’s bridesmaids and cousins!

Thank you to K, B and CG for the fabulous photos!

The Beautiful Newly-weds outside Gallier Hall!

When it came to say goodbye once again and head home to Milan, I was very sad to leave K, B and their family, as I have always been made to feel so at home and they couldn’t have shown me more kindness. However, as is true with most weddings, they are very family orientated and for the first time in a long time, I was feeling a little home sick, which is why wedding number 2 a little later in the year was the perfect antidote!