I fell in love with Italy the very first time I visited with my family as a teenager.  We spent an idyllic week on Lake Garda, eating Italian ice cream and pizza and going on little jaunts around the lake!   One day I was sitting outside a small church sheltering from the blazing sun, when an old Italian Signora came over to me and pulled out from the paper bag she was carrying, the largest peach I had ever seen! She insisted I took it from her and wouldn’t leave until I had taken a bite! (I will admit this sounds a little like the story of Snow White, but luckily for me I didn’t end up in a deep sleep in a glass coffin, surrounded by the seven dwarfs! Except my Dad was there…so I guess I could say Grumpy made an appearance!! Sorry Dad!) Anyway…it was the most delicious thing I had ever tasted and now every year when the peaches arrive and I gorge myself on them, I always remember that old lady and my first holiday in Italy which sparked my love affair with the country, culture, food and people!

Luckily for me, during the following years as I began studying Italian and before my eventual move to live here, I was never short of fantastic films or TV series to watch, which further fuelled my love for the country. Even now when I watch any program about Italian food, art or cinema I can not help but smile and be inspired by what the country has to offer and so grateful that I get to live here. I especially love programmes where the presenters are overtly enthusiastic and passionate about the country, as I find I feel even more drawn into what they are talking about. Which is why I was really excited to be able to attend a talk from Art Historian and critic Andrew Graham-Dixon on my recent visit to Venice.

Andrew presented BBC’s ‘Italy Unpacked’ with Italian chef Giorgio Locatelli, in which they travelled through Italy exploring the art, history, food, landscape and culture of the country’s different regions.  His passion for art and Italy itself is really quite captivating and in the talk he did for us in Venice, he concentrated on the idea of ‘desgni’ or in English ‘designs’.  Most of the people attending the talk were architects and interior designers, so he wanted to express to us the sense that this one word, can have multiple meanings. For example we can design a building, or a garden, scenery for a play, clothes or a beautiful ceiling or wall, but just as equally the same piece of art can be read differently depending upon the viewer.  An example which Andrew showed us, was the Dome of Parma’s Cathedral. In 1520 Antonio da Correggio, was commissioned to paint the dome of the Cathedral and what he created is awe-inspiring. He painted the assumption of the Virgin Mary being lifted up and taken to heaven to meet her son Jesus Christ after her death. The way he painted the dome creates a whirling effect like a spiral, so that if you are to stand underneath it, you feel as if you too are being lifted up to heaven.  The Dome which took Correggio eight years to complete was very innovative for the time, when most domes were being painted very simply, for example blue with stars.  To link back to the point Andrew was making that designs can be viewed and thought of differently and have multiple meanings, he told us about the immediate reception Correggio’s Dome received. While Titian, considered to be one of the greatest painters of this time, remarked Correggio’s work was incredible and that if you were to turn the dome upside down and fill it with gold it would not be enough to pay him with, the Canon of the Cathedral itself, said the work to him resembled little more than a ‘stew of frog’s legs’!  Maybe a little harsh, but it perfectly illustrates the idea that something beautiful and meaningful to one person, can create little or no effect on someone else.

The thing I found most interesting about the talk, was learning about the Franciscan movement and how during the time of Francis of Assisi and the order of the Franciscan Monks, the representation of Christ through art changed quite dramatically.  The movement saw a change in the representation of Christ on the cross change from an untroubled Christ to a bleeding Christ. The idea was that the art needed to speak to the people and be more realistic as opposed to idealistic, the result being that it would make the stories from the bible seem more relevant to the viewers of the time. It was all about taking art to the poor and making them believe the stories of the bible and feel connected to them in a way previous art had not. This is also relevant now, as the current Pope decided to be known as Pope Francis, in honour of Saint Francis of Assisi. He chose this name as he is especially concerned about the poor, just as Francis of Assisi and the Franciscan movement was. 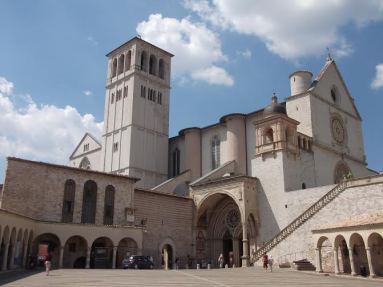 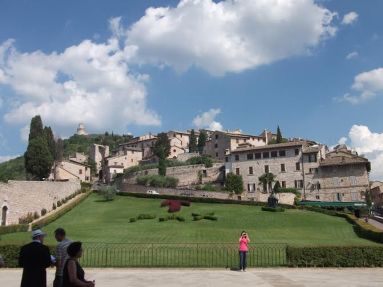 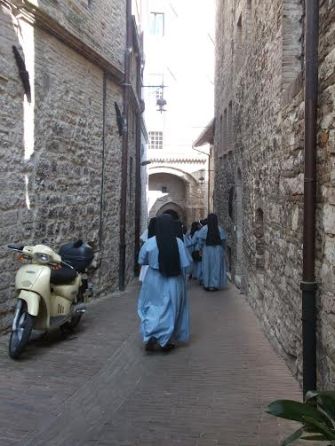 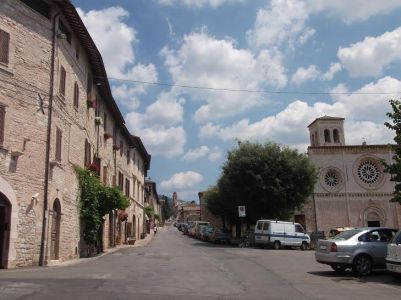 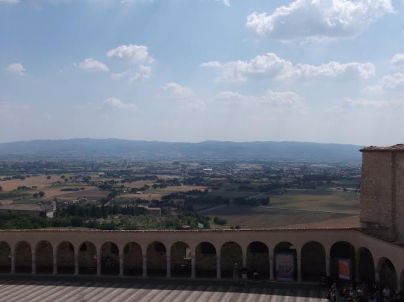 These are just a few of the ideas Andrew discussed and are, in particular, the ones I found the most striking or interesting. I don’t know much about art as I have never studied it, but I love learning about it and will definitely be putting Parma’s Cathedral on my list of places to visit! I also highly recommend visiting Assisi, it is a beautiful place!

Unfortunately I didn’t get any good quality photos during the talk, so I have included some from my visit to Assisi in 2011.

2 thoughts on “The Thrill of Learning”