Despite it being one of the warmest winters on record in a long time, I am finding England rather cold and extremely windy. This, I am taking as a sign, that after three and a half years living in Milan, I am starting to be “Italianised”! Yesterday on a last minute Christmas present run, I found myself on more than one occasion pointing out people to my Mum and saying, ‘That is ridiculous, why is she dressed like that? It is Winter!’, about the girl in a skirt (no tights) and boots, a man in a t-shirt and jeans and a little girl in the garage in leggings and a sleeveless summer dress! The people of England have gone mad! It is worse than when they wear shorts and t-shirts and it is only 16 degrees out! My Mum merely replied, ‘Anna it is hot! It isn’t cold at all!’

I remember the first year I lived in Milan and I wore ballerinas in November without socks and got told off by more than one person and wore just a light rain coat up until mid December – but gone are those days. Yesterday I was wearing boots, a thick jumper, a big warm coat buttoned up to the top and a scarf wrapped round me and I was still cold! However, a down fall of my supposed “Italianisation”, is that I seem to be sick more often. I don’t know if the two things are connected, but I am suffering my third cold in the last two months, despite being wrapped up warm and eating well to keep up my defences.

We finally put the Christmas tree up at home a few days ago, so things are starting to feel all cosy and festive! Many people in England put up their decorations very early, even in November, but in my family it is tradition that we put them up later and as a child, I only saw our Christmas tree on Christmas Eve! Some of my friends think this is strange and say it is a waste, but I disagree and think it makes it much more special! Especially since I have German heritage and so as a child, we celebrated as a family with Christmas dinner on the 24th, so there was always great anticipation and excitement in the house on Christmas Eve morning. 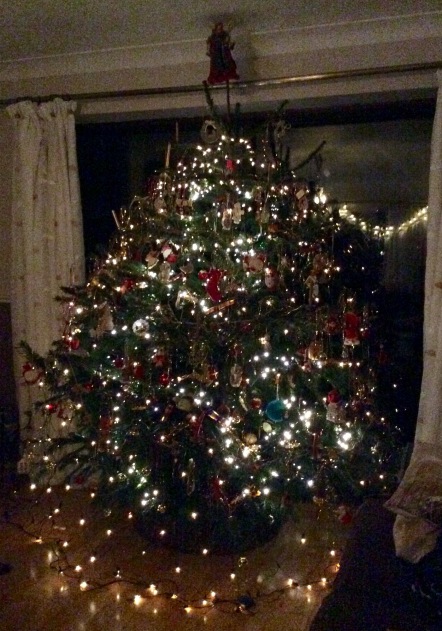 England is the country that already has Christmas decorations and treats on sale even before Halloween is over and Easter eggs on sale as early as February. I guess this is now normal in the consumerist society we live in, but I will say in Italy it does seem to be much more subtle. Yes, the shops have Christmas products available around the end of November, but in Milan people wait to put up their trees until they celebrate Sant’Ambrogio, the Patron Saint of Milan, on the 7th of December. Of course the shops are busy in the run up to the festive season, but it seems less chaotic and panicky!

At home, everywhere you go there is that last minute rush to buy loved one gifts and Christmas songs blaring from radios and the smell of baking in the air. Lights shining from Christmas trees and blow up Santa’s and snowmen in gardens! Plus supermarkets are filled with panic buying shoppers, filling up their trolleys with supplies as if we won’t be able to buy any groceries for a month, when in actual fact, the shops are only closed for one day! It does make me smile, even though I was there too!

So, whether you are celebrating the season or not, spending it at home or away, in the sun or the cold, with family or friends, I wish you all a Merry Christmas!